From 5th until 7th or January, I was happy to participate at the 24th Norwegian Symposium on Chromatography as an invited speaker. It was a very good and successful start for the new science year: three days filled with exciting talks on emerging chromatography techniques and detection methods. Some of the most talks that I found especially inspiring were Prof. Manuel Miro’s and Gertrud Morlocks presentations on 3D printed liquid chromatography (LC) and  (HPTLC), and Prof. Achille Cappiello’s presentation on coupling LC with electron ionization (EI). I was happy to present the standard compound free quantification approach we have been developing that is now available from Quantem.

Norwegian Symposium in Chromatography is a very notable national conference which host ca 200 participants every time and is held every two years. The conference takes place Sanderfjord, about 100 km south of Oslo. The conference host a number of international and national invited talks, young scientists talk as well as poster and vendors exhibition. I was generally amazed by the high quality of the conference talks and a variety of topics studied in Norway.

The conference had two talks strongly linked to 3D printed columns by Prof. Miro and Morlock. On the first day, Prof. Miro offered a crash course on 3D printing LC columns. 3D printing has an enormous potential in the democratization of column production. Among other examples, Prof. Miro showed how columns need to be neither linear not with a circular cross-section. While Prof. Morlock showed how HPTLC can be used to detect food contaminants with high sensitivity. Notably, the current HPTLC instrumentation can be fitted to 30x30x30 cm box and Prof. Morlock called HPTLC as “chromatography in the office”. To me, there were two very new technical details. Firstly, they use the printing of the elution solvent to the centre of the TLC plate to analyse several samples in parallel and very fast. Secondly, she showed that bioassays can be deposited directly on top of the HPTLC plates to allow highly sensitive effect driven analysis of various samples.

Prof. Achille Cappiello also introduced some of the most recent improvements they have made in connecting LC and EI. Over the last couple of years, his group has made tremendous improvements in the field. Currently, they are working on a Liquid-Electron Ionization source and have already shown some applications. Most notably, Liquid-Electron Ionization produces the same type of mass spectrum as the electron ionization does, so the abundant GC/MS spectral libraries can be used to identify detected compounds. 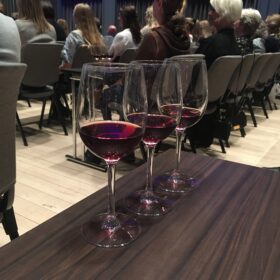 In addition to the advanced scientific program, the conference also aimed at crosslinking different scientist by allowing ample time for discussions and socializing. One of the notable events was wine tasting sponsored by Matriks. The wine tasting focussed on Pinot Noir and different versions of this wine made around the world.