As LC/ESI/MS is the tool for various fields in routine analyses (quality control over pesticides but also mycotoxins in the food we eat, drug monitoring in patient’s body, etc) to solving highly demanding scientific questions (finding biomarkers, decoding nervous signalling, etc). However, one thing haunting quantitation in these analyses is the matrix effect. The influence of sample compounds (called matrix compounds; for example the flavor compounds in tomato) on the ionization of our target analyte (e.g. the monitored mycotoxin in tomato). This effect may both give results that are either higher or lower than the actual content. Though underestimation is more common. Meaning that the mycotoxin may actually exceed the allowed limits, but matrix effect may hinder our ability to detect this. This makes matrix effect very important and the need to remove its origin becomes obvious. 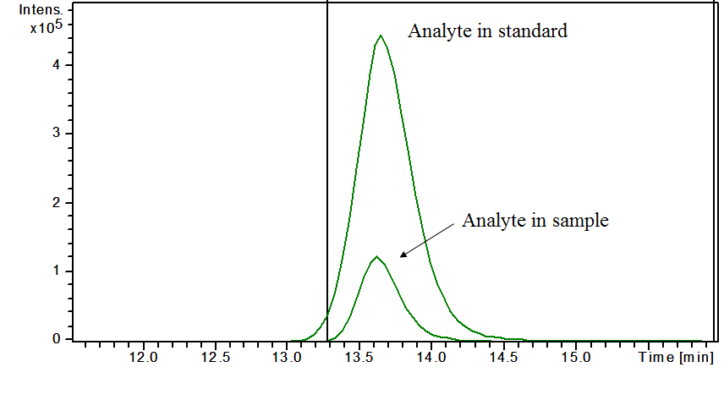 This is how matrix effect looks on a chromatogram.

Though, since I started interacting with this field in the beginning of my Master‘s thesis, one thing has definitely improved: the awareness of the presence of matrix effect. Still much unclarity exists in the fundamental level. There have been numerous mechanisms proposed to the origin of matrix effect, however some of them are contradictory or have not been reproduced latter. However, there is one general mathematical model proposed by Christie Enke in 1997, which states that matrix effect is caused by the fact that two compounds compete for the surface charge in the ESI droplets and that the extent of matrix effect is related to the magnitude of these affinities. However, it is unknown of what these affinities depend on. In one of my previous works I discovered that this affinity is well correlated with ionization efficiencies for ionisable compounds1.

1 It is known that also compounds that do not give ESI/MS signal also produce matrix effect; however, this process is expected to follow a different mechanism.

2 Previously different solvent conditions have been also used to reduce or eliminate matrix effect, but with the aim of providing better separation of the analyte and matrix components.

4 It would be best to have lowest LoD-s, no matrix effect, high sensitivity, etc all at once.